GO BEYOND THE LIGHT! A new power has been born from the ancient pyramid above Europe's icy borderlands. Beneath it, a dark empire has risen, united under the banner of the Fallen Cell of Darkness, Eramis. Join other guardians and destroy the empire at any cost - even if it means using the darkness itself.

EUROPE WAITS! The scattered Houses of the Fallen have gathered and built their new empire on the icy moon of Europa. Defy the unforgiving, ice-age borderlands, infiltrate the BrayTech facility of the Golden Age and uncover secrets that lie deep beneath the ancient ice.

HARNESS THE DARKNESS! As the new threat emerges, so does a new, mysterious power - Stasis. Rooted in darkness, Guardians will wield this new elemental power alongside Arcus, Solar and Void to dominate the battlefield with epic supers. Titans, Warlocks and Hunters each use Stasis in different ways, slowing enemies with stasis fields, surrounding them with destructive power and shattering them.

EXOTIC EQUIPMENT! Some believe Europe is nothing but a frozen graveyard of the Golden Age, its treasures long ago swallowed by ice and darkness. You know better. Beneath the ruins lie countless relics, an arsenal of weapons and much more. Retrieve this groundbreaking technology from the clutches of time and dare to tame the wasteland.

DEEP STONE CRYPT: Beneath the frozen tundra of Europe lies the Deep Stone Crypt. It has been dormant for decades. Your strike team cautiously approaches, weapons at the ready, and the final plan is set in motion.

Bonus contents of the Beyond Light Deluxe Edition

Exotic Impulse Rifle "No Time to Explain" and its Catalyst

New Exotic Sparrow "Every Other Horizon 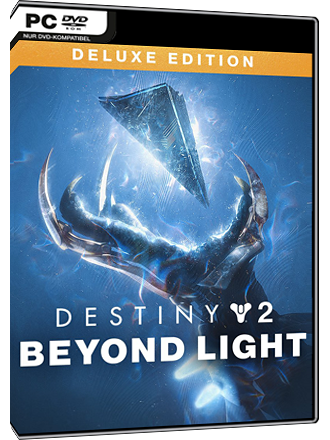