In this legendary age, heroes walk the earth. And yet it only takes one impulsive act to trigger a conflict that will shake the world. The bold Paris, prince of Troy, kidnapped the beautiful Helen from her palace in Sparta. As they sail away, Helen's husband, King Menelaus, curses her name. He will bring his misguided wife home - no matter what the cost!

King Agamemnon, who rules far and wide over Mycenae and its noble walls, hears his brother's call. He summons Achaean heroes from all over the world, including the fleet-footed Achilles and Odysseus with the silver tongue. The Greeks set course for Troy, and with it slaughter and inevitable war. For there, on the battlefield outside the great city, legends are born ...

TROY is the latest title in the Total War saga and was inspired by Homer's Iliad. It focuses on the historical setting of the Trojan War and adds new period-inspired features to the series.

Through a unique combination of turn-based empire management and spectacular real-time battles, Troy explores this epic conflict from both Greek and Trojan perspectives - uncovering the layers of myth and legend to reveal the reality by which they may have been inspired.

Experience the events surrounding the Trojan War brought to life like never before. Shape your legend as one of eight iconic heroes. Immerse yourself in a character-driven dramatic narrative and defeat your antagonists. Create your empire with strategy, governance, diplomacy and all-out warfare as you conquer this massive and impressive recreation of the Bronze Age Mediterranean. 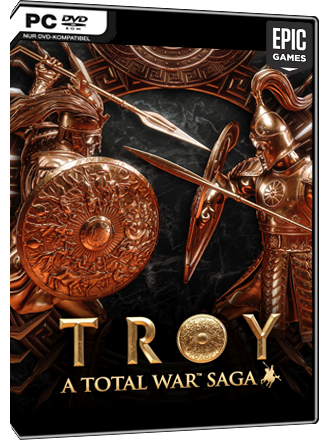